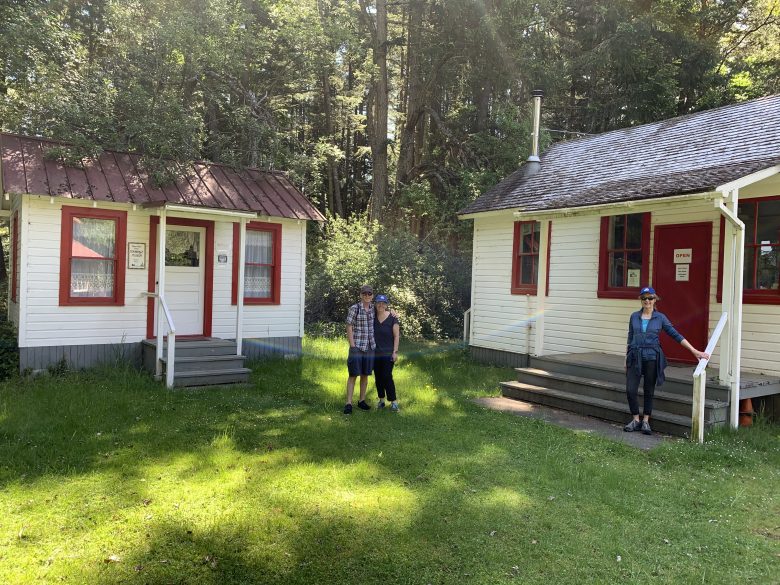 Faithful readers will remember Stuart Island from previous journeys of P.V. Impromptu. The Island has a few year-round residents, more in years past, but is now mostly a spot for second homes.

One of my favorite places on the Island is the old school and teacher’s house. The former is now a library where residents or visitors are invited to leave-a-book, take-a-book. The former residence is now a small museum. (See above).

One of two Treasure Chests on the Island is located next to the schoolhouse. An Island family produces Stuart Island themed clothing and postcards and leaves them in the chests. The deal is, take what you like and mail a check when you get home.

In years gone by, Stuart island was isolated in a way that modern folks have a hard time understanding. No phones, infrequent mail service, and little transportation. The local museum tells the sad tale of a family with five children that set off in their rowboat for San Juan Island on a stormy Summer day to buy supplies. It wasn’t until the children failed to show up at the schoolhouse in the Fall that they were missed.

We set out on our first morning for Turn Point Lighthouse in the company of Anacortes friends, Greg and Marlene. It’s a six mile round trip on unpaved roads. I love the walk because it takes you past the Treasure Chests and the old school.

In addition, you may get a beautiful view of the entrance to Prevost Harbor and Mount Baker.

Turn Point lighthouse, on the northwestern tip of Stuart Island holds an important position in commercial navigation. This is where tankers and freighters turn towards Vancouver, BC after traveling through the Strait of Juan de Fuca from the Pacific Ocean.

Reid Harbor was the perfect place for Mary Anne to try out her Christmas present: a paddleboard.

I watched nervously from Impromptu, ready to hop in the dinghy at a moment’s notice should she take a spill. Remember, the water hereabouts is cold and falling in can be life-threatening.

Never fear. Mary Anne has excellent balance and is a natural at this sort of thing.

We spend three perfect days on Stuart Island with temperatures in the 70s and calm winds. Next stop, Garrison Bay on San Juan Island, home of the British forces when the Island was jointly occupied by both the US and Britain. 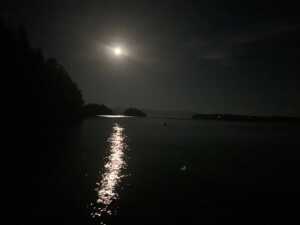